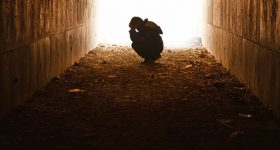 According to the United States Interagency Council on Homelessness, 115,676 public school students in Texas were reported to the U.S. Department of Education as homeless during 2018. Of those, 4,591 were unsheltered. “Unsheltered” is a euphemism for spending your nights at the mercy of the elements, as you don’t have a traditional roof over your head. Tents, cars, and abandoned buildings don’t count. The other approximately 111,000 homeless children were in a shelter, a hotel or a motel, or living with extended family or friends, a situation referred to as “doubling up.” The vast majority (roughly 88%) of homeless children are doubled up, and these living situations lend themselves to being transitory and ever-changing, the kind of constant chaos that defies the structure and predictability that children both need and crave.

This kind of transitory lifestyle also means that a child is likely to change schools frequently, making it even more difficult to identify them and connect them and their family with the services they need and are lawfully entitled to under the McKinney-Vento Act. And as for identification, the vast majority of districts in Texas use the Student Residency Questionnaire (SRQ) to identify homeless children. And that’s all. Thus, it is very safe to assume that some homeless children are not identified because parents may lie on the form out of shame or fear of losing their children. So it’s also reasonable to assume that the data we have is conservative at best, not to mention that it doesn’t include children under five years old who haven’t been enrolled in a public school yet.

Almost 5,000 students were unsheltered in the state of Texas last year. That’s almost four per district. And those are only the ones that we know about.

Homelessness in Texas is on the rise. The number of unsheltered students is likely on the rise, too. What are the policies on your campus? How do you go about finding these kids? Please look for them. Ask your teachers the right questions. Find funding for Parent Support Specialists. Start a food pantry and a clothing closet on your campus and find ways to get those things in front of the right people. SRQs aren’t enough–they’re only filled out once a year. Lots of things happen in the course of a year in the life of a struggling family.