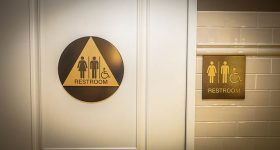 Current and former high school students, their parents, and organizations brought suit challenging an Oregon school district’s transgender safety plan for a student who identified as a male, but was female by birth.  The plan allowed the transgender student to use restrooms, locker rooms, and showers that matched their gender identity, rather than their biological sex assigned at birth.

The suit alleged that the high school’s policy violated the Due Process Clause, Title IX, the First Amendment’s Free Exercise Clause, and Oregon law. The trial court granted the defendants’ motion to dismiss for failure to state a claim and the plaintiffs appealed to the Court of Appeals for the Ninth Circuit.

The court of appeals affirmed the dismissal.  According to the court, there is no Fourteenth Amendment fundamental privacy right to avoid all risk of intimate exposure to or by a transgender person who was assigned the opposite biological sex at birth.

The student safety plan also did not discriminate on basis of sex under Title IX.  The court stated: “Title IX does not specifically make actionable a school’s decision not to provide facilities segregated by ‘biological sex.’”With respect to the claim that the safety plan violated the parents’ right to direct the upbringing of their children, the court of appeals cited case law holding that “accommodating the different ‘personal, moral, or religious concerns of every parent’ would be ‘impossible’ for public schools, because different parents would often likely, as in this case, prefer opposite and contradictory outcomes.”

The parents also alleged that the safety plan violated their First Amendment right to freely exercise their religion.  However, the allegations did not sufficiently allege that the district’s plan was not neutral toward religion.  In addition, the appeals court determined that the plan was rationally related to legitimate government interests, for purposes of free exercise of religion.  The parents could not proceed on any of their claims challenging the transgender safety plan.  Parents for Privacy v. Barr, No. 18-35708, 2020 WL 701730 (9th Cir. Feb. 12, 2020).