District Did Not Violate Transfer Student’s Due Process Rights; But Allowed an Equal Protection Claim to Proceed 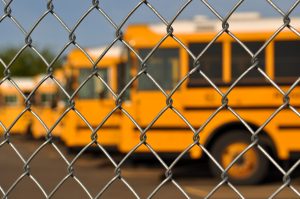 J.G. was a transfer student in the Vega Independent School District in October of 2012, when he was among a group of students who were accused of and briefly suspended for inappropriate conduct on a bus operated by the district. Prior to suspending J.G. for 2 or 3 days, the school principal questioned J.G. about the incident and required that he explain the alleged events in writing. In spring of 2013, several months after J.G. was suspended for the bus incident, the district denied J.G. enrollment for the following year.

The parents sued on J.G.’s behalf and alleged that the district violated his constitutional rights by denying J.G. his right to an education under state law. In addition, the district allegedly denied J.G. due process “by requiring him to make a statement without the consent of the parent.” The parents also alleged a violation of the Equal Protection Clause of the Fourteenth Amendment because J.G., a minority student, was allegedly similarly situated to another transfer student involved in the bus incident but was the only student denied enrollment for the following year.  The district filed a motion requesting dismissal of the suit.

The Court dismissed the due process claims but allowed the equal protection claims to proceed. The parents argued that the district denied J.G. his right to an education. But they failed to present any legal authority that gives a transfer student the right to receive an education from the district to which the student wishes to transfer.  The parents did not assert that he could not attend his local public school in his district; thus, they did not plead sufficient facts to support a conclusion that J.G. suffered a constitutional injury.

The suit asserted that the district had a past practice of enrolling students from J.G.’s same area of residence.  But to maintain a claim for a constitutional violation by the district, they had to show a policy, custom or practice that led to the alleged injury.  In this case, there were no facts alleging that J.G. was denied enrollment because of an official policy or custom of the district, or that the district had a policy or custom of always enrolling students from J.G.’s local area of residence. Nor were there facts that “demonstrate a causal link between the municipal action and the deprivation of federal rights.”

The court also found no due process violation related to the bus suspension.  The United States Supreme Court has made clear that in situations involving suspensions of ten days or less, as in this case, due process requires only that the student be given oral or written notice of the charges against him and, if he denies them, an explanation of the evidence the authorities have and an opportunity to present his side of the story.  In this case, the record showed that the principal talked to the student and asked him to provide a statement, which met these due process standards.

The Court, however, did not dismiss the equal protection claims.  To establish a denial of equal protection, a plaintiff must prove the existence of purposeful discrimination motivating the state action which caused the complained-of injury. Racial classifications are subject to strict scrutiny, which places the burden on the district to prove that its actions were “narrowly tailored to achieve a compelling government interest.”

According to the suit, J.G., a minority Hispanic student, was a member of a protected class. J.G. was the only student involved in the bus incident who was denied enrollment for the following year. The parents alleged that J.G. was treated differently than another, non-minority transfer student who was also involved in the bus incident. Viewing these facts in the light most favorable to the parents, the court found the allegations to be plausible and, therefore, allowed the parents to pursue the equal protection claims.