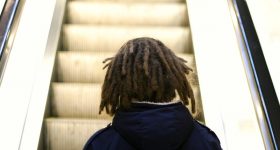 Last Thursday DeAndre Arnold appeared on the Ellen show and was gifted a $20,000 dollar scholarship from Ellen and Alicia Keys. On Friday he was publicly invited to the Oscars as a guest of Gabrielle Union and Dwayne Wade during “CBS This Morning”.

DeAndre’s recent refusal to cut his dreadlocks resulted in his suspension from school and the news that he cannot walk in his high school graduation ceremony with his peers. Barbers Hill ISD in Southeast Texas insists that the dress code infraction is about the length of his hair and not about the dreadlocks themselves. (District policy is that boys’ hair may not grow past their shirt collar.) However, this dress code impasse has invited the attention of Hollywood and American media. Meanwhile, DeAndre won’t cut his hair, and the district won’t change its policy or make an exception.

This begs the following questions: Will national attention and pleas from celebrities work? Will the district change its mind because Ellen asked them to? Will DeAndre’s presence on live television at the Oscars inspire officials to rethink the dress code? Is this about district policy or racism? And does a forced game of chicken in the national spotlight help or hinder either of the opposing sides and their clashing values?

This isn’t the first time that a student’s dreadlocks caught national media attention. A little over a year ago, Andrew Johnson, a high school wrestler in New Jersey, was forced by a referee to choose between forfeiting his match, wearing a hair cover (which had not been forced upon him in wrestling matches prior to this incident), or cutting his dreadlocks. Andrew chose to cut his dreadlocks. An investigation by the New Jersey Attorney General and the Division on Civil Rights found that the referee made a racially motivated call and he was suspended for two years. In further fallout from that incident, the relevant dress code was updated to strike any language regarding a person’s natural hair, but it maintained the parts of the policy that related to the length of the hair. And the length of the hair is what Barber Hill ISD is claiming to be the problem with DeAndre Arnold.

However, in Andrew’s case, the incident also instigated a decision to provide implicit bias training to all high school sports officials in New Jersey. Which is as good as an acknowledgement of systemic racism. So my next question is: How will Barber Hill ISD maintain its stance that race and hairstyle isn’t the issue when DeAndre claims that his choice to keep his long dreadlocks is in honor of his Trinidadan roots?

I guess we must wait and see. And for DeAndre and Barber Hill, “the hardest part of playing chicken is knowing when to flinch.”