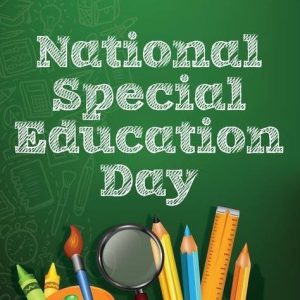 December 2nd was National Special Education Day.  It was first celebrated in 2005 in honor of the 30th anniversary of IDEA.  IDEA—the Individuals with Disabilities Education Act—originally dates to 1975 when President Ford first signed into law the Education for All Handicapped Children Act.  IDEA later became that law’s new moniker in 1990.

Beyond providing an education and needed resources to those children, IDEA was also a step forward in removing the stigma of disabilities.  Today, roughly 14% of students receive special education services.  That’s 7.3 million kids.  Of those, about 33% receive services for a specific learning disability (a disorder in or more of the more processes involved in understanding or using spoken or written language).  That’s 2.4 million kids.

One of those 2.4 million is my son.  I don’t ordinarily go in for random, self-proclaimed holidays like National Cat Day or National Taco Day or National Taco-cat Day.  But this is a holiday that I can gladly get behind, not only to recognize the significance of the court cases and all the legislation they have spawned that have driven huge gains for kids, but also to recognize that differences in people should be acknowledged and celebrated instead of stigmatized or shamed.

It was a long road to my son’s dyslexia diagnosis—a cracked, crumbling road littered with sudden potholes and terrifying sinkholes.  During the first grade, my son was usually in tears by the end of the day.  But now he is a thriving, smiling third grader receiving the specialized instruction and resources he needs.  Now every day at school is a good one.  He is excited to go to school, and he is happy at the end of every day.