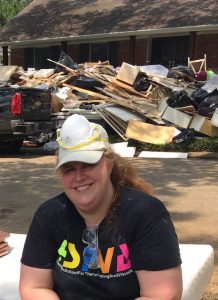 Jennifer Lankau Chase outside a home in Houston, where she and fellow teachers from HSPVA are helping families to clear damage from their homes.

As many across the country celebrate the first day of school today, students and teachers in Houston and places along the Texas coast continue to dig their way out of the wreckage caused by Hurricane Harvey. In the Houston metro area, more than 40 schools were damaged by the storm and thousands of students were displaced.

Jennifer Lankau Chase, a social studies teacher at the Houston High School for the Performing and Visual Arts, and the winner of this year’s Legal Digest Kemerer Award, said that she and her fellow teachers were spending the week assisting 53 HSPVA students whose homes were badly damaged.

“We are pulling out drywall, flooring, carpet, and packing out the damaged items,” she said. “It’s very, very heartbreaking. And it comes in waves.”

As HSPVA is a magnet school, it draws students from across the Houston area. While the school itself is fine and will open on Sept. 11th, many of its students live in parts of the city that were heavily affected, such as Meyerland.

“Once the storm subsided, we worked with our principal and used social media to put the word out and start collecting information from families in need of help,” said Chase, who helped to assemble a spreadsheet of needs among HSPVA families. “It was just heartbreaking. It was everything from the loss of one to two cars to, if someone had water in their home, just catastrophic. Most of the homes were one-story ranch homes, so if water got in the house, the whole house was gone.”

Last week, Chase and her colleagues formed work crews and began going house to house to help their families begin the process of restoration and abate the onset of mold. Parents and students also banded together to help and bring lunch to the work crews.

“Everyone and the kids are so grateful and happy to see us, but it’s hard because no one has really had a chance to process it all yet,” she said.

Chase and her colleagues will continue to work on affected homes through the week until they have to report to school on Friday. She said that the schools reopening will be a big help to folks who need a safe place for their kids to go while they work to rebuild and salvage their homes. She also pointed out that one of the biggest needs now was not donations of things, but rather volunteer labor to assist people in cleaning out the drywall, flooring and other materials in their homes order to abate mold. Elderly people are in particular need of this assistance.

The Houston Independent School District has established a Harvey Relief Fund to assist the families of students affected by Harvey.

Citizen groups like Recover Houston are popping up alongside initiatives run by local churches to organize laborers to help clear debris from homes.