Department of Education Will No Longer Investigate Transgender Restroom Complaints 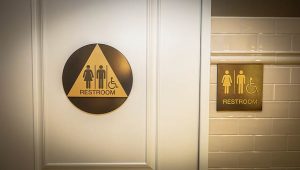 The U.S. Department of Education will no longer investigate or take action on complaints filed by transgender students who are banned from restrooms that match their gender identity, according to a report by BuzzFeed News.

While no formal announcement has been made by the DOE, Liz Hill, a spokesperson for the agency, confirmed to BuzzFeed News the Department’s position that restroom complaints are not covered by Title IX.  According to Hill, “Title IX prohibits discrimination on the basis of sex, not gender identity.”

Hill stated further that harassment or retaliation for failing to conform to sex stereotypes is sex discrimination prohibited by Title IX, but bathroom complaints are not.

Courts are split on the matter, but the Seventh Circuit Court of Appeals ruled in May of last year, in Whitaker v. Kenosha Unified School District, that a school policy requiring a student to use a bathroom that does not conform to their gender identity violates Title IX because it “punishes that individual for his or her gender nonconformance.”

Shortly thereafter, in June of 2017, the DOE issued a memo suggesting that the Office of Civil Rights (OCR) may not have a jurisdictional basis to pursue a school restroom complaint.  The memo stated:  “It is permissible, for example, for one allegation in a complaint (such as harassment based on gender stereotypes) to go forward while another allegation (such as denial of access to restrooms based on gender identity) is dismissed.”

Given these latest statements by the DOE, it is unlikely that transgender bathroom complaints will gain any traction in the OCR complaint process, unless there is some other basis in which to allege harassment based on gender stereotypes.