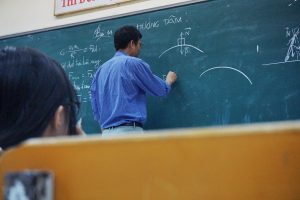 Elsa Rodriguez is a current Houston Independent School District employee and a member of the HISD teacher’s union, the Houston Federation of Teachers (“HFT”).  Rodriguez became active in HFT in 2008 while teaching at Oates Elementary.  Rodriguez filed several union grievances against her principal.

The principal placed Rodriguez on a performance plan and asked the superintendent and the HISD Board of Trustees to approve non-renewal of Rodriguez’s contract.  The Board of Trustees approved non-renewal, which Rodriguez and the HFT then challenged.  Rodriguez subsequently entered an agreement with HISD allowing Rodriguez to keep her job and be transferred to a new school with a one-year demotion if she agreed not to sue HISD, or any of its officers, employees and lawyers.  Rodriguez was transferred to Jefferson Elementary School for the 2011-12 school year.

After Rodriguez suffered an injury, she took leave.  Upon her return, Rodriguez’s new principal reassigned her from a third grade classroom in an auxiliary building to a second grade classroom in the main building for the 2013-14 school year.  Due to medical limitations, Rodriguez asked the principal for help moving her belongings to the new classroom, but was allegedly denied any help.  Her materials were eventually moved after Rodriguez called the District’s EEO Office.

Sometime later, Rodriguez and several other teachers met with the principal to discuss their writing curriculum. Rodriguez claimed that the principal made negative remarks about her.  The principal later was made to apologize publicly and privately after Rodriguez filed an HFT grievance.

Meanwhile, the principal contacted the Chief Elementary Schools Officer regarding anonymous reports of STAAR testing irregularities. An investigation ensued and Rodriguez and other teachers were implicated.  As a result, Rodriguez and the other teachers were suspended from their teaching duties.  Rodriguez was reassigned working at HISD’s Butler Stadium Field House.   The District allegedly did not clear Rodriguez of the cheating allegations for over a year despite HISD’s knowledge that she had been on medical leave for several weeks before, and many months after, the alleged cheating took place.

Rodriguez sued HISD, alleging violations of her First and Fourteenth Amendment rights.  The District moved to dismiss the suit and the district court granted HISD’s motion.  Rodriguez appealed.  The court of appeals observed that, since Rodriguez sued only the school district, she had to establish three elements: (1) a policymaker, (2) an official policy, and (3) a violation of constitutional rights whose “moving force” is the policy or custom.  The appeals court held that Rodriguez’s suit did not state sufficient facts to show that an HISD policymaker or policy was the “moving force” behind any constitutional violations, or that the disputes Rodriguez had with HISD administrators can be fairly identified as actions attributable to HISD.

Rodriguez claimed that the superintendent was HISD’s “delegated policymaker in personnel matter[s] at all levels of HISD employment,” which the HISD Board of Trustees ratified. Rodriguez further stated that the Superintendent “espoused and publically (sic) implemented an anti-teacher union policy” throughout his tenure at HISD.

The court of appeals disagreed.  Under Texas law, final policy-making authority rests with the Board of Trustees and not with the superintendent.  In addition, Rodriguez did not state any facts to show that the alleged constitutional violations were the result of a decision or action of the Board of Trustees.  Because Rodriguez’s suit did not state a valid cause of action against the District, the court of appeals upheld dismissal of the suit.