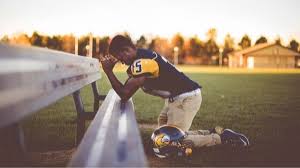 The U.S. Supreme Court ruled 6-3 in favor of a high school football coach who was terminated for his prayer at high school games. Joseph Kennedy engaged in prayer with a number of students during and after school games. The Bremerton School District in Washington state asked that he discontinue the practice.  The district was concerned about liability based on a potential violation of the First Amendment Establishment Clause.

Kennedy refused to discontinue his prayer practices and was able to rally widespread public support. After his termination, Kennedy sued the school district for violating his rights under the First Amendment Free Speech and Free Exercise Clauses. The district court and Ninth Circuit Court of Appeals ruled in favor of the school district and Kennedy appealed.

Justice Neil Gorsuch delivered the opinion of the Court and observed that the Free Exercise and Free Speech Clauses of the First Amendment protect an individual engaging in a personal religious observance from government interference. The Court wrote:

Here, a government entity sought to punish an individual for engaging in a brief, quiet, personal religious observance doubly protected by the Free Exercise and Free Speech Clauses of the First Amendment. And the only meaningful justification the government offered for its reprisal rested on a mistaken view that it had a duty to ferret out and suppress religious observances even as it allows comparable secular speech.  The Constitution neither mandates nor tolerates that kind of discrimination.

The Supreme Court reversed the lower court decisions and ruled that Kennedy was entitled to judgment in his favor. The case is Kennedy v. Bremerton School District, Dkt. No. 21-418, and the Supreme Court opinion can be found HERE.