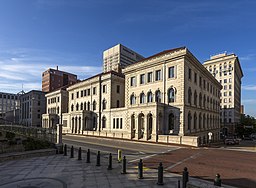 The Fourth Circuit Court of Appeals reversed a lower trial court’s dismissal of a Virginia student’s free speech lawsuit. Jonathan Starbuck sued the Williamsburg James City County School Board (“the Board”) asserting that it violated his constitutional rights when it suspended him for remarks he made regarding the mass shooting at Marjory Stoneman Douglas High School.

A teacher overheard Starbuck’s comments and Starbuck was removed from class for the remainder of the day. The suit alleged that Starbuck was interrogated and that a police officer cleared Starbuck, reporting that there was no threat made or criminal offense. Nevertheless, Starbuck was later suspended for two days. He appealed and the Board upheld the suspension.

The trial court granted the Board’s motion to dismiss, but the Fourth Circuit reversed. According to the appeals court, the Board’s actions in upholding the suspension was the moving force behind the asserted constitutional violation. It was alleged that only because the Board upheld the suspension does it remain on his permanent record. This was enough to raise a valid claim against the Board. According to the appeals court, the Board’s approval of a suspension allegedly imposed to punish protected speech is a decision of the final policymaker of the district that could give rise to liability against the Board.