Meet Richard LaMascus: The Recipient of the 2019 Kemerer Award 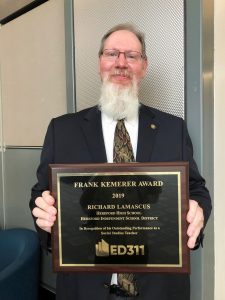 “History teaches us that destinies are created from what we truly believe.”

This is the quote that hangs in Richard LaMascus’ classroom as a reminder to him of why he chose to become a Social Studies teacher. As a 19-year-veteran of Hereford ISD in Hereford, Texas, Richard says he still wakes up every morning energized and excited to teach. This is because he firmly believes that learning about Social Studies and history has the power to change the lives of students.

“I believe that the power to change one’s destiny lies within the knowledge and understanding of what has happened in the past, and that understanding history is a foundation that can change a person’s future for the better,” he said. “The hardest thing anyone will ever do is change what they believe about themselves and others, yet within those changes lie the ability to shape a new destiny, with a new hope for ourselves and all of those around us.”

This year, Richard was the recipient of the Kemerer Award, presented to him at the 32nd Annual Education Law Conference for Principals. The award is given each year to a Social Studies teacher in Texas who has demonstrated exceptional commitment to the role.

When it comes to commitment, Richard says he has it in spades. “Each topic and subject I teach is my favorite one,” he said. “I just love bringing excitement and enthusiasm to the classroom, because it’s infectious … and there is excitement in teaching my students something they have never learned before.”

Over the years, Richard has built a world-class Social Studies program at Hereford, and he travels often with his students to compete in University Interscholastic League (UIL) events. In fact, he and his students have won several titles over the years in district, regional, and statewide competitions. Through hands-on mentoring and guidance, Richard has also helped several students at Hereford, a school of 1,100 in a Texas-panhandle, agricultural town, get in to universities like Dartmouth College, Stanford University, and Harvard University.

Richard attributes part of his success to the skills he learned on the job as a car salesman, a job he held prior to becoming a teacher. In this role, he says he developed the ability to speak to people’s dreams. “Life’s not about what you need, it’s about what you want,” he said. “No one needs a new car, but everyone wants one. I learned to sell to that – [to people’s dreams].”

As a teacher, he does the same thing – only his “product” is education and self-realization through pursuing one’s calling.

“Choosing to teach Social Studies was the best career choice I could have ever made … students need positive role models who bring answers to difficult questions and demonstrate that education brings an ability to choose a path in life which may provide a better chance to succeed,” he said. “Students and parents also need to know about the different opportunities that exist in life and to be taught that overcoming obstacles to life and rising to conquer challenges offers great rewards. I also believe that success would not really be success if it came easy.”

The Kemerer Award is named after Frank Kemerer, the founder of the Texas School Administrators’ Legal Digest (now ED311) and a longtime School Law Professor at the University of North Texas. The Kemerer Award was initiated in 2006 in an effort to honor outstanding high school social studies teachers and to honor Frank. The award selection process is run by TASSP and the award is given each year at the Education Law Conference for Principals.