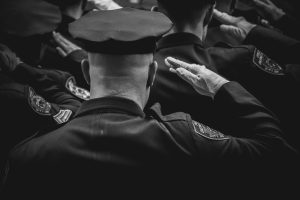 While the officer’s DOL complaint was pending, the District reduced the work days for all police department officers, essentially cutting the officers’ summer hours.  Also as a result of the cuts, the district dissolved teaching positions, reduced the pre-kindergarten program, left vacant several maintenance positions, and cut the day care program.

Shortly after the cuts were made, the district discovered an accounting error that freed up two to three million dollars in funding.  Part of that money was used to hire part-time security officers. However, when the five police officers’ hours were not reinstated, they filed an internal grievance with the school district regarding overtime and the reduction in work days.  Two officers also reached out to the county district attorney to complain about police misconduct. Ultimately, the DOL concluded that the District did not violate the FLSA and all of the officers’ internal district grievances were denied.

The officers then filed suit against the district alleging violations of the FLSA overtime rules, the Equal Pay Act, and their First Amendment free speech rights.  All of the claims were dismissed prior to trial, except for retaliation under the FLSA and First Amendment. Those remaining claims were dismissed at trial because the officers did not produce enough evidence to warrant submission of those claims to the jury.  The officers appealed the trial court rulings.

The Fifth Circuit Court of Appeals affirmed the judgment in favor of the school district on all issues. With respect to the EPA, the officers first had to show that they received less money but performed work in a position requiring equal skill, effort, and responsibility under similar working conditions as a coworker of the opposite sex who is similarly-situated.  The officers alleged that they were paid less than one of the female officers in violation of the EPA. However, according to the Court, the officers did not prove that they performed work in a position requiring the same skill, effort, and responsibilities of that officer. Two of the male officers failed to prove that they had equal job qualifications or duties and they did not have the same level of education, factors that courts consider under the EPA.  Therefore, the EPA claims were properly dismissed.

The FLSA requires employers to pay certain employees no less than time-and-one-half their usual rate for all hours worked above the standard 40-hour workweek.  One method of complying with the overtime payment requirement is the “fluctuating work-week” method (FWW), which is an employment arrangement in which an employee receives a fixed weekly pay for a fluctuating work schedule with a varying number of hours worked each week.  According to the appeals court, while the officers claimed that they were improperly required to be on call 24 hours per day, they did not prove how many hours they actually worked, which was fatal to their claims.

To make out an FLSA retaliation claim, the officers first had to prove (1) participation in protected activity under the FLSA; (2) an adverse employment action; and (3) a causal link between the activity and the adverse action.  The officers alleged that the district cut their work hours in retaliation for raising complaints to the Department of Labor. The district demonstrated, however, the cut in hours was not due to their complaints, but due to budgetary concerns arising from significant legislative funding cuts to the district.  The officers were unable to prove that those reasons were false or that they would not have been subjected to a change in work hours if they had not complained to the DOL.

According to the suit, the district retaliated against the officers for filing grievances to the district and complaints to the district attorney and Department of Labor.  To establish a First Amendment retaliation claim, the officers had to show that (1) they suffered an adverse employment action; (2) they spoke as citizens on a matter of public concern; (3) their interest in speaking outweighed the School District’s interest in promoting efficiency; and (4) their speech motivated the School District’s adverse action against them.

The appeals court observed that when such complaints raise only personal issues and internal work grievances they are not considered speech “on a matter of public concern.”  Indeed, the record showed that the officers’ complaints and grievances were made primarily in furtherance of their personal employer-employee disputes. Because the speech was not on a matter of public concern, it was not protected under the First Amendment.  The court of appeals upheld the judgment in favor of the school district on all claims raised by the district police officers.