Can Citizens Who Make Threats At Board Meetings Be Banned? 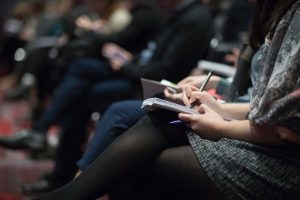 Two days later, Monroe attended an HISD board meeting. He wore a bandana around his neck and a t-shirt with an HISD principal’s picture on it. Above her picture, the shirt said, “PRINCIPAL IRMA SANDATE MUST GO!”; below her picture, it said, “BECAUSE SHE DON’T LIKE BLACK PEOPLE.” Monroe gave an angry speech and repeatedly called the principal an “idiot.” He insisted that she immediately be fired. At the end of his speech, Monroe paused and raised the bandana over his mouth towards his eyes and said, “I got a team that can protect every last one of [the teachers]. You need some help?” Lowering his bandana, Monroe shouted “Do something with that idiot over there. This is the mandate: Either you take her out or I’m going to take her out.” Throughout his speech, including during the mandate, he pointed at the board with a hand gesture that, according to some in the room, looked like a gun. Monroe stated that he did not remember using a gun gesture during the meeting.

HISD later issued a criminal trespass warning that banned Monroe from HISD facilities indefinitely.  The district later modified the trespass warning so that it would expire December 12, 2019.

Monroe sued, claiming violations of his First Amendment rights. According to the suit, the “ban” constituted a “prior restraint” and “viewpoint discrimination.”  He sought a preliminary injunction barring the district from enforcing the trespass warning. The trial court denied the injunction and Monroe appealed. However, the appeals court returned the case to the trial court to consider whether Monroe’s behavior constituted a true threat, in which case the trespass warning would be considered reasonable.

The trial court concluded that Monroe’s conduct at the second board meeting constituted a true threat and, therefore, the board’s decision to ban him from board meetings did not violate his First Amendment rights.  The Court stated:

Plaintiff Monroe meant to communicate a serious expression of an intent to commit an act of unlawful violence against Principal Irma Sandate when, while wearing a shirt with Principal Sandate’s photograph and the text, “PRINCIPAL IRMA SANDATE MUST GO! BECAUSE SHE DON’T LIKE BLACK PEOPLE,” Plaintiff paused, pulled up a bandana over his nose and mouth and spoke in a slower, deeper tone to say, “I got a team that can protect every last one of [the teachers]. You need some help?,” and then shouted, “Do something with that idiot over there. This is the mandate: either you take her out or I’m going to take her out,” followed by a gesture with his hand that some thought imitated a gun. It was this combination of speech and conduct–and especially the declaration of a “mandate” to “take her out or I’m going to take her out,” after using a bandana to conceal all of his face except for his eyes and referring to his “team,” that the Court finds from a preponderance of the evidence constituted a true threat. In making this finding, the Court has considered not only the testimony presented in Court but also the video that was taken in real time as Plaintiff made the threat.

Video also supported this account of Monroe’s behavior.  The trial court concluded that the ban, which was temporary and definite in duration, reflected a reasonable response to serious and legitimate security concerns. The temporary ban did not discriminate against Monroe’s speech on the basis of viewpoint and was reasonable.

Although Monroe’s threatening conduct justified a temporary ban from school board meetings, the restrictions outlined in the trespass warning letter went too far.  It is critical for school administrators, board members, and district law enforcement to consult legal counsel before issuing a trespass warning to ensure that restrictions meet constitutional requirements.