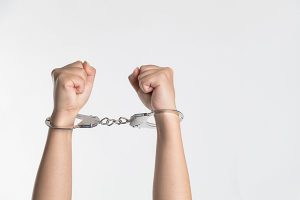 On October 8, 2013, a group of seventh grade girls (twelve and thirteen-year-olds) were handcuffed, arrested, and transported in police vehicles from their middle school campus to the police station. An assistant principal had asked a school resource officer (“SRO”) to counsel a group of girls who had been involved in ongoing incidents of bullying and fighting. School officials gathered the girls in a classroom to wait for the SRO. The group included both aggressors and victims, and the school did not identify or separate them. When he arrived on campus, the SRO initially intended to verify the information the school had given him and to mediate the conflict. Within minutes, however, the officer concluded that the girls were being unresponsive and disrespectful. He decided to arrest the girls because, as he explained to them, he was not “playing around” and taking them to jail was the easiest way to “prove a point” and “make [them] mature a lot faster.” The SRO stated that he did not care “who [was] at fault, who did what” because “it [was] the same, same ticket, same pair of handcuffs.”

Three of the girls sued the arresting officers and the County of San Bernardino for unlawful arrest in violation of state laws and the Fourth Amendment. The district court denied the officers’ qualified immunity defense and granted summary judgment in favor of the students.  The Ninth Circuit Court of Appeals affirmed the ruling.

The US Supreme Court has held that the Fourth Amendment’s prohibition on unreasonable searches and seizures applies to searches conducted by public school officials.  School officials may, under certain circumstances, conduct warrant-less searches of students under their authority. The search, however, must be reasonable and reasonableness depends on whether (1) the action is justified at its inception, and (2) the search as actually conducted was reasonably related in scope to the circumstances which justified the interference in the first place.  These standards also apply to seizures of students, such as the arrests in this case.

The appellate court determined that the arrests of the three middle school students were not reasonable because they were not “justified at their inception.”  The officers were given only generalized allegations of the girls’ bickering and fighting, rather than any specific information related to each girl.

The court also looked to the SRO’s motivations in arresting the girls, noting that he told them he wanted to “teach them a lesson” and prove a point.  It was clear to the court that the arrests were not intended to maintain campus safety; nor were they carried out because the SRO suspected the students of committing a crime.

The court also concluded that the arrests were not reasonably related in scope to the circumstances leading up to the arrests.  According to the court, “the summary arrest, handcuffing, and police transport to the station of middle school girls was a disproportionate response to the school’s need.”  The school principal had simply called upon the officers to address an ongoing feud between students. The Court stated:

Deputy Ortiz faced a room of seven seated, mostly quiet middle school girls, and only generalized allegations of fighting and conflict among them. Even accounting for what Deputy Ortiz perceived to be non-responsiveness to his questioning, the full-scale arrests of all seven students, without further inquiry, was both excessively intrusive in light of the girls’ young ages and not reasonably related to the school’s expressed need. Ironically, the primary instigator of the conflicts, L.V., was the only one released to a parent at the school campus.

The appeals court upheld the judgment in favor of the students. This case is a good reminder that a search or arrest of a student must be justified at its inception and must be proportionate to the need to maintain order and discipline.  SROs cannot arrest students to prove a point or as a scare tactic. The judgment in favor of the students may prove costly to the defendants in this case because a finding of a constitutional violation can lead to an award of damages and attorneys’ fees, as well as personal liability for the individual officers involved.