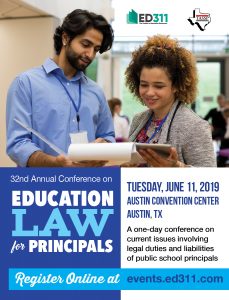 This summer’s Education Law Conference for Principals will include presenter Joy Baskin, the Director of Legal Services for the Texas Association of School Boards, on school safety, campus threats, and dealing with mental health issues.  Dealing with threats of violence can open up a host of legal landmines for school administrators.

A recent case out of California illustrates the complexity in dealing with student threats at the campus level, especially when those threats originate off campus.  The case, McNeil v. Sherwood School District 88J, 918 F.3d 700 (9th Cir. 2019), involved a student who created a hit list of his high school peers in his personal journal at home.  The student’s journal entry read: “I am God” and “All These People Must Die.”  The journal also included graphic descriptions of violence. The boy’s mother discovered the journal and contacted a therapist.  The therapist, in turn, informed the local police department.

Police searched the student’s residence and found a rifle and ammunition.  The student later admitted to police that sometimes he thought “killing people might relieve some of the stress he feels,” but that he would never carry out his thoughts and that the journal was only used “to vent.”  The student was not charged criminally.

State law and district policy required the district to inform the students who were named on the hit list.  Following that, a flurry of activity ensued, including media inquiries, many calls and emails from parents, members of the public requesting more information, social media posts of the student, and at least one student arming himself at school to protect against the threat.  Some parents had their children leave school early upon learning of the threat, while other students missed several days of school or transferred out of the district. The school principal recommended expulsion of the student for a year for making “a threat of violence” that “has caused a distinct and substantial disruption to the school environment.”

The parents sued the school district, claiming violations of the student’s constitutional rights, including his First Amendment free speech rights.  The trial court entered judgment in favor of the district and the parents appealed.

A three-judge panel of the Ninth Circuit Court of Appeals unanimously affirmed the trial court ruling.  According to the appeals court, “courts considering whether a school district may constitutionally regulate off-campus speech must determine, based on the totality of the circumstances, whether the speech bears a sufficient nexus to the school.”  The court refers to this as the “nexus test.” It concluded:

Thus, the district could regulate the student’s off-campus speech without violating his First Amendment rights.  The disciplinary expulsion was also upheld because the “district could reasonably conclude that the student’s continued presence at the school at the time of his expulsion would have caused a substantial disruption of, or material interference with school activities and would have interfered with the rights of other students to be secure and let alone.”  The court of appeals upheld the judgment in favor of the district.

For more on the issues of school safety, campus threats, and mental health, join us at Ed311’s Conference on Education Law for Principals scheduled June 11, 2019 in Austin, Texas.  For details and information, click here.