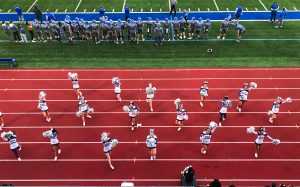 The Fifth Circuit recently affirmed the dismissal of a First Amendment suit filed by a cheerleader who had been removed from her cheerleading squad due to her off-campus social media activity.  The case is Longoria Next Friend of M.L. v. San Benito Indep. Consol. Sch. Dist., No. 18-41060, (5th Cir. Nov. 4, 2019).  The record showed that, a few weeks after she was selected to be the head varsity cheerleader at San Benito High School, M.L., a minor, was stripped of her position and dismissed from the team when her cheerleading coaches discovered a series of posts on her personal Twitter account containing profanity and sexual innuendo.

When M.L. was dismissed from the squad, she had accumulated a number of demerits for posting material on her Twitter account in violation of the Cheerleading Constitution.  Eight of the posts were third-party messages created by other Twitter users. Using her own account, M.L. “liked” these posts, causing them to be shared with her social-media followers. The record contained two other posts allegedly deemed inappropriate by M.L.’s coaches. In the biography section at the top of M.L.’s Twitter account, she identified herself as a member of “San Benito Varsity Cheer.”

After the District denied her grievances, M.L.’s mother, Zulema Longoria, filed suit on M.L.’s behalf under 42 U.S.C. § 1983. She argued that the actions of the school district, its superintendent, the high school principal, and the cheerleading coaches violated M.L.’s rights to free speech, due process, and equal protection. After the defendants moved for dismissal, the district court held that the individual defendants were entitled to qualified immunity and dismissed M.L.’s complaint for failure to state a claim. Longoria appealed to the Fifth Circuit Court of Appeals, which has jurisdiction over Texas.

M.L. argued that the defendants violated her First Amendment rights when they dismissed her from the cheerleading team as a punishment for her social-media activity. She argued that her off-campus Twitter posts, which were not threatening or directed towards the school community, did not come within the disciplinary reach of school officials. The district court agreed that the complaint stated a “legally sufficient First Amendment claim against [the] Individual Defendants,” but it held that there was no clearly-established law that would have made it obvious to the school officials that extracurricular discipline was subject to the same level of constitutional protection as other forms of school-based discipline. As a result, the court granted qualified immunity to the individual defendants.

The Fifth Circuit agreed that the law was not so clearly established as to put the school officials on notice that removing M.L. from the cheerleading squad, under these specific facts, violated the First Amendment.  The appeals court declined to set a bright-line rule as to whether such off-campus speech was entitled to First Amendment protections, stating that “a more defined rule will be left for another day.” The Court, however, did set forth some guidelines that school administrators should apply when faced with similar instances of social media use:

The general rule in analyzing student First Amendment rights is that only where a student’s speech actually causes or reasonably might be projected to cause a “substantial disruption of or material interference with school activities” may a school impose discipline for student speech.

The Court of Appeals acknowledged, however, that the “pervasive and omnipresent nature of the Internet” raises difficult questions about what it means for a student using social media to direct her speech towards the school community.

Significant to the Court’s ruling, in this case, was the fact that it only involved extracurricular discipline.  The record showed that M.L. and her mother both signed the Cheerleading Constitution, which put them on notice that M.L.’s social-media activity could be monitored and penalized. M.L. identified herself as a member of the San Benito cheerleading team on her Twitter page. And perhaps most notably, M.L. was dismissed from an extracurricular activity as a consequence of her speech—not suspended from school altogether. The fact that the retaliatory action here involved an extracurricular sanction further distinguished this case from others involving school suspensions and the like.  Whether to discipline a student over social media activity implicates the First Amendment and legal counsel should be consulted before moving forward with any such disciplinary action.